You may think the phrase “million-dollar smile” is just a metaphor, but a smile could cost you millions of dollars in litigation damages if you aren’t careful, at least according to Nirvana LLC, the legal entity that owns the intellectual property rights relating to the 90’s rock band Nirvana.

If you thought the image of a yellow smiley face was too common to be owned by anyone, then think again. In 1991 when Seattle-based grunge band Nirvana rose to stardom with the release of their song “Smells Like Teen Spirit,” it was virtually impossible to walk down the halls of a high school or college campus without seeing a t-shirt like this: 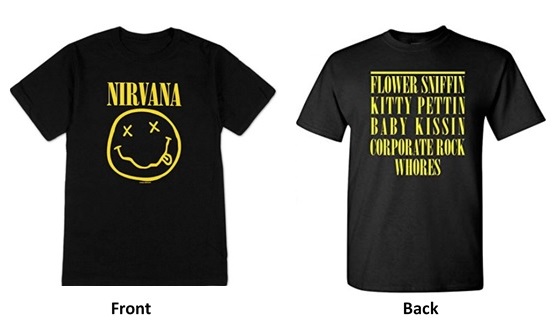 Nirvana’s front man, the late, great Kurt Cobain, allegedly created the band’s Smiley Face icon in 1991, where it debuted on a flyer announcing the release of the band’s album “Nevermind.” While there are various theories behind the meaning of the logo, one fact cannot be disputed: Nirvana’s Smiley Face logo became one of the most enduring images of the band’s short, but amazing, career.

Nirvana holds a copyright registration for its Smiley Face logo, which it claims to have licensed since 1991 in connection with a variety of merchandise, including t-shirts, hats, hoodies, backpacks, glasses and other products. Nirvana currently licenses the logo to fashion retailers like Target, Urban Outfitters, and Barneys.

Inspired by the Seattle music scene of the 90’s, in 1993 designer Marc Jacobs, who was the head designer at Perry Ellis at the time, launched a collection of clothing called the “Grunge Collection.” The “grunge” look included plaid flannel shirts, mismatched patterns, knitted or backwards caps, printed granny dresses, ripped and faded jeans, and ill-fitted pants, accessorized with Doc Martens, combat boots, or high top sneakers. Unfortunately for Jacobs, many Seattle music purists at the time mocked his high-fashion nod to their grunge look, and Perry Ellis allegedly fired him over the collection. To some, the grunge look was considered, well, “ghastly,” and although I personally wore flannel shirts tied around my waist throughout much of high school, this video clip (quoted below) from one of my favorite 90’s cult films sums up the grunge look perfectly:

So okay, I don’t want to be a traitor to my generation and all but I don’t get how guys dress today. I mean, come on, it looks like they just fell out of bed and put on some baggy pants and take their greasy hair – ew – and cover it up with a backwards cap and like, we’re supposed to swoon? I don’t think sooo! ….

Fast forward 25 years later, Marc Jacobs, undeterred and now head of his own fashion brand, has resurrected many of the same designs from his 1993 Grunge Collection, only this time he is calling it the “Redux Grunge Collection,” and among the collection are fashions bearing a yellow Smiley Face design. On December 28, 2018, Nirvana filed a complaint in California district court against Marc Jacobs for copyright and trademark infringement. Nirvana alleges that Marc Jacobs is using a smiley face design “that is obviously similar to, and an intentional copy of, Nirvana’s copyrighted image . . . with the minor differences unlikely to be noticed by the consuming public.” Nirvana further alleges that Marc Jacobs’ campaign to market its Grunge Redux Collection even borrows song titles from Nirvana’s music, like the wording “sure smells like teen spirit,” which appears on certain product pages on Marc Jacobs’ website, and “Come As You Are,” another Nirvana song title, which appears on Mac Jacobs promotional materials. Marc Jacobs has not yet filed an answer in response to Nirvana’s complaint. It will be very interesting to see how this lawsuit plays out. For example, will Marc Jacobs make a fair use defense on grounds that its design is transformative and/or a parody? Will he challenge the originality and distinctiveness of Nirvana’s yellow smiley face logo design?

Believe it or not, intellectual property fights over the ubiquitous, universal symbol for happiness are nothing new. Companies other than Nirvana have brought frown-inducing lawsuits claiming exclusive rights in smiley face designs.

Wal-Mart has used a minimalist, yellow smiley face logo for decades to alert shoppers to deals, but that smile faded to a frown in 2001 when it discovered The Smiley Company and its founder Franklin Loufrani was earning millions for licensing a similar yellow smiley face around the world. After Loufrani filed a U.S. trademark application to secure the exclusive right to its smiley face logo in the United States, Wal-Mart took action by commencing an opposition proceeding before the Trademark Trial and Appeal Board of the United States Patent and Trademark Office. In its opposition, Wal-Mart alleged that Loufrani’s smiley face was not distinctive enough to function as a trademark, and even if it was, Wal-Mart had prior and superior rights in its own smiley face design. Wal-Mart also alleged that Loufrani’s logo was likely to cause consumer confusion with its logo. Undeterred, in 2009 Loufrani filed a lawsuit in Illinois district court, alleging that his smiley face logo was “readily distinguishable” from Wal-Mart’s. The parties eventually settled their dispute in 2011, and both parties continue to use their respective logos.

If you thought IP disputes over smiley faces were limited to fashion companies and big retailers, well you are sadly mistaken. In 2015, Pennsylvania-based restaurant chain Eat n’ Park, which owns a trademark registration for a smiley face logo in connection with cookies, sued Chicago American Sweet and Snack for using a smiley face on its cookies. To many social media users, the dispute appeared absolutely ridiculous. Based on court documents, the parties appear to have settled their dispute before that ridicule could continue for too long.

While companies like Nirvana, Wal-Mart, and Eat n’ Park might claim IP rights to the depiction of a smiley face, many believe that the original yellow smiley face was first created over 50 years ago in Worcester, Massachusetts by graphic artist Harvey Ball. As legend goes, Ball conceived of the design in 1963 when he was asked to create an iconic graphic to raise the morale of insurance company employees after a series of corporate mergers. Ball apparently completed the design in less than 10 minutes and received $45 in cash for his work. The State Mutual Life Assurance Company (now known as Hanover Insurance) created tons of buttons bearing Ball’s iconic design as a way to get its employees to smile more. While we do not know if Ball’s design actually worked to boost employee morale, the smiling face became an iconic image. Although neither Ball nor State Mutual appear to have tried to register the design as a trademark or assert their copyright over others, they may have the strongest historic claim to this iconic symbol.